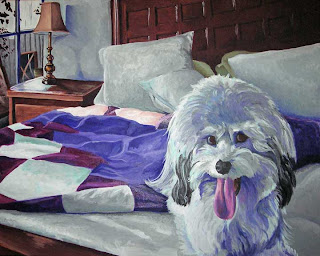 "Paco in the Big Bed"
(in progress)
20"x16" acrylic on canvas
SOLD
Hope you bought some art for your loved ones on Black Friday and had a Happy Thanksgiving.

We again hosted the Baker City Turkey Trot, breaking the 300 barrier this year, and both the men's and women's course records were broken. Who would have thought, under such conditions? This was the first year that we had ice and snow on the ground. It seems like fun was had by all even with the cold temps.

Today's snow was beautiful, but I'm glad it didn't snow on Thursday.

Paco is continuing to take shape, and I love how he's coming to life. Before long he'll be heading home to Terri and Dennis. 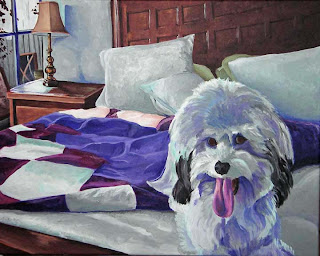 Thankfully, I spent very little time on it. So little in fact that I haven't fully corrected it. When I get done with Paco, I'll finish that area. 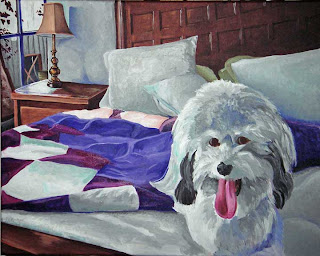 I spent much of today creating drawings for mugs Corrine is making for show at Cowgirl Cash that coincides with Cyclocross Nationals in Bend, OR next month. Of the three drawing two of them will be used, and when they come out of the kiln, I'll gladly post them.

I've been painting late into the night for the past few days, mainly because I've gotten a late start, which I did again today. The difference today is that we're headed to see Harry Potter now, and if I have the energy I'll do a little more when we get home.

Look what's back there... 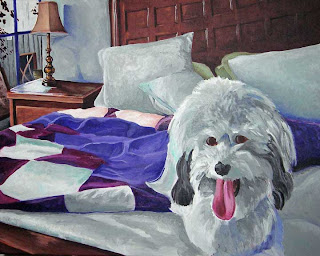 I had a wonderful day talking painting, and technique with artist Katherine Treffinger. She inspired me to try abstract backgrounds as I've blogged about recently, and today she graciously opened her studio to share how she works.

The use of a color wheel was the second best piece of advice she gave me. The best was to let go of the parts of a painting that seems precious. It's a great reminder that Corrine was taught in pottery, and she shared with me several years ago. She even used it in the classes she's taught. After creating a well formed bowl or vessel she'll just smash it in front of her students.

The lesson is that if we aren't open to pushing a form to it's limits, we'll never grow or develop our abilities.

So after dinner I got into the studio and put what I think to be the finishing touches on the background. I was even able to put some paint on Paco's forehead. Who knows what tomorrow will bring. 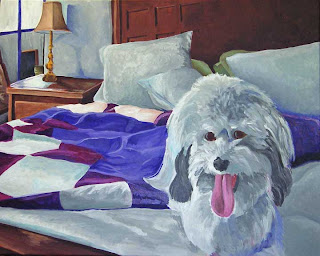 I spent the day painting at Short Term Gallery again today, and had very few customers or distractions. You could say another day in paradise.

I darkened the background more today, and depending on what light I view it in, it looks just right. Well, almost right.  There are a couple of areas I will make a little lighter again. I think I'm about 5 to 6 hours from working on Paco.

The headboard, the environment outside the window, and the areas around the edges of the canvas need a little work before the fun begins with Paco. 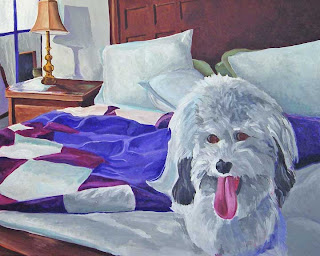 As Mystery Lady peacefully leaves with the  police she inform me that she dropped her NASCAR lighter in our bushes while trying to keep herself warm. Thankfully she didn't burn herself and the bushes up. She also tells the officer that she left a note in our garage behind a rake, and this is my only real regret of the whole event. I handed the note over without reading it. What was on that paper?

By the way this was the long short version of the story. See me in person and I'll fill in the gaps.

p.s. all of the doors are locked now, every night. No more hanging out in our garage Mystery Anyone.
Posted by Dogs by Bri at 11:17 PM 5 comments: 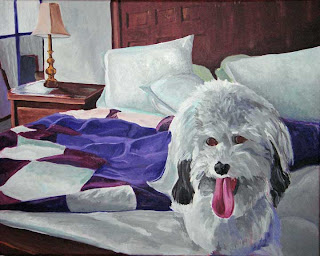 The title of the posting gives away what I did over the past few hours. I trimmed away some of Paco's right ear, and darkened the pillow cases to push them further away into the background.

Sitting back and looking at it now, I think they still need to go darker, but I'll decide tomorrow.

I may not get to painting tomorrow because Corrine and I are heading to LaGrande to see the "Season's Fair" show at the Nightingale Gallery. When we were out of town at Wildfire in Bend, I was awarded Best in Show at the opening there. So I wanted see the show before it comes down on Thursday. It's a real honor to be awarded something like that. The painting was "Zephyr's 1st Ride". 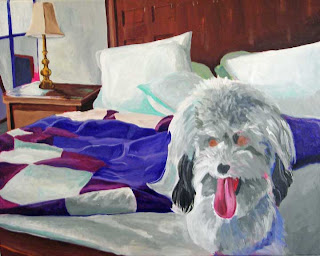 I decided to make a change to the sheets today. Not in my bed, but in this painting. I work from photographs, but I'm not trying to recreate the photo. I of course want my paintings to feel life like, but I have no desire to copy to photo. Improving upon what's in the photo is my goal. Something more alive than the two dimensional image I work from.

The quilt on the bed in the photo is beautiful and intricate, I see no reason to duplicate it in paint though. The real subject is Paco, and the viewer doesn't need to be distracted by the details of a quilt.

An artist friend named Ann, gets very upset with people who think that the only art worth anything, is works of photo realism. I think sometimes that any kind of realism bothers her. I think of my work as somewhere in between the two styles.

I also worked on an abstract background today, and I'm feeling the pull toward those even stronger. I think that will be my style of choice for the foreseeable future. Stay tuned to see if that holds true. 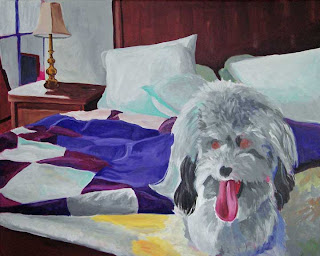 We had a great time in Bend at the Wildfire Pottery Showcase. Good sales, and good times with friends.

Now that we're back I'm back in the studio, and here's an update on how the picture looked just before we left.

See the lamp? I told you it was coming.