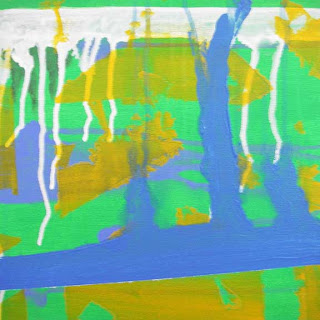 Tonight was Thursday Art Night at the Eltrym and the film was "Third Ward TX". If you have a chance to see this film, do. Buy it, rent it, share it with everyone you know. It is an excellent film about the power of a community, and the power of art in all our lives.

Now to this painting. The other day I masked off areas and brushed a very liquid yellow onto it. I like what the paint did, but it moved in a way I didn't expect. Most of it went under the painters tape, so instead of having crisp lines, I have these odd organic shapes. Which work better than the crisp lines would have. A fact I would have realized to late, had it turned out the way I intended. 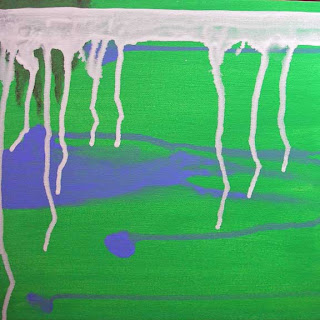 
12"x12" acrylic on canvas
NFS
This is a canvas in progress for a dog named Flora. She's a beautiful black poodle, and like always I can't wait to get to painting her.

Of course with this new abstract background painting I'm doing who knows when that will be.

The one thing that I've been doing while painting this, is to work on the "Someplace Special" painting as well. It helps to keep me fresh for when I come back to this one. One pure representational the other not at all.

You'll still see me doing both.

Something Special in progress... 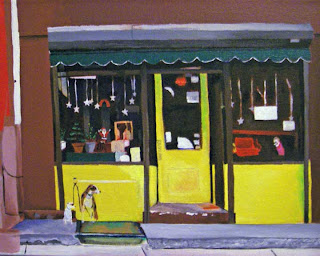 I was away from blogging and painting for awhile because we were celebrating our 10 year wedding anniversary last weekend. We spent it racing at the Grand Columbian Half Iron triathlon in Grand Coulee, WA.

Before heading out I spent sometime on this painting, it's one of my gifts to Corrine, and have worked on it a few times since we've been back. This is a picture of the dogs in front of the store Something Special in NY, which was across the street from the apartment we lived in.

I'm enjoying how things are taking shape and have also started a new abstract background for a commission I'll be doing. You might see more of this one in progress or you might not see it till it's done. 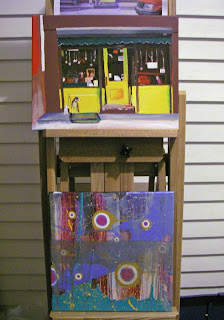 The studio tour was great fun, and I hope people enjoyed hearing me talk about painting, as much as I enjoyed talking about it.

These are the two paintings I worked on during the weekend. The one of the two dogs outside a store front is an older painting that was put to the side because of commission work. Now, I'm working on it a little here and there.

The abstract piece is ready for a dog, and I just received some photos of a dog that's a commission, and that poodle maybe the dog that ends up on this canvas. I have to study the pictures to see if there's one that works with background, and if the people who've commissioned me like this background as well.

Time to get some rest after a very busy and fun weekend. Thank you to everyone who visited our studios this weekend. We had great fun showing you around. 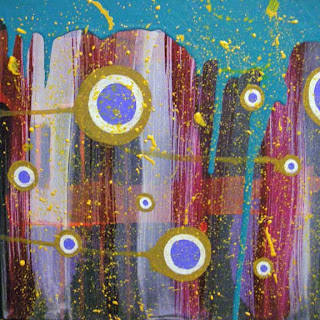 The paint is splattering, but the artist still doesn't know where the painting is going. Hmmm?

This is something I'm going to need to sleep on. I want to add another element to it, but can't figure out what that is yet. Drips, geometric objects, splatters?

Am I having fun? Yes. 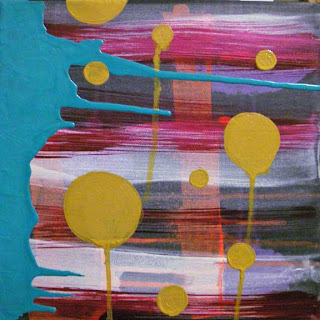 Here's a new canvas in process. I have no idea where it's going, but I have a feeling I'll be adding a second color to the golden dots. That color might drip, and it might not.

This weekend is the Baker Area Studio Tours, so please, if you're in the area come by the studio. Corrine and I are #3 on the tour. But, you can go in any order you want. The day starts at Noon and ends at 5 PM, both Saturday the 11th and Sunday the 12th.

You might even get to see this piece in person as I make the critical artistic decisions.

e-mail me if you want directions or need any other info related to the Studio Tour. There are 16 artists taking part.
Posted by Dogs by Bri at 9:07 PM 2 comments: 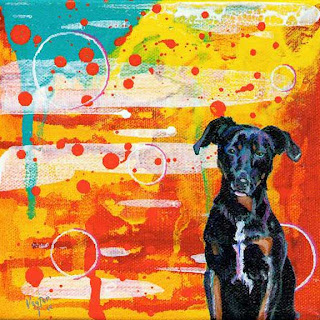 "Abstract Dot Fairmont"
6"x6" acrylic on canvas
$200 unframed plus $5 for shipping in the US
Email:dogbri@q.com to purchase

I was inspired by my friend Katherine Treffinger, who's work is amazing, to create something like this. My first introduction to Katherine's paintings  was at Clark and Company Home here in Baker, then we went to her studio in Cove during the Grand Ronde Studio Tour. I just love the movement in her works and had to try to create something like it.

The hard part for me was knowing when to stop work on the background. I spent almost as much time on the abstract part of this painting as I did Fairmont the dog. The other issue was that I liked to background so much that I was nervous about adding Fairmont. Once I got started though, everything feel into place.

Speaking of studio tours the Baker area Studio Tours will be this weekend Sept. 11th, and 12th from 12-5 PM. Please come and visit Corrine and I in our studios. 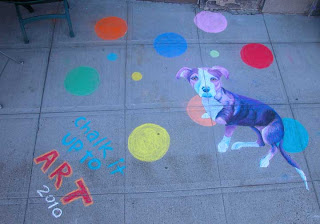 Several artists here in Baker spent the day Chalking It Up on Main St. It was a great amount of fun to take part in. I spent about 3 hours creating this piece and will be removing it on Monday night. So if you want to see it in person. You have about 24 hours to do so.

We'll be doing "Chalk It Up" again next year on the Labor Day weekend. If you missed it this year make sure to mark your calendar for 2011.