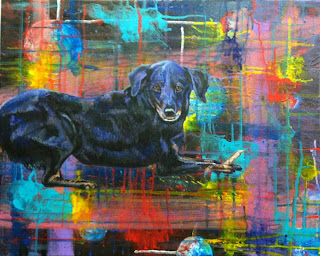 This has been one of the most fun paintings, I've ever done. I love the way the paint moved, the expression and movement of Jezabel. It turned out so well, and her owner loved it to. What more could I ask for?

I think the things that I learned while painting this background will be useful on paintings in the future. I'm still working on the painting of Maggie, but I've also started two new canvases. One will have a dog named Ubi on it, and the other will be a city scene with a dog on a billboard.

The dog on the billboard might become a new series, that is if I like doing this next one. The city scenes always take so much longer than I think they will, so I'm sure as I get into this one, I'll get a better sense as to whether or not I want to do more.